NextWhat Keeps Me Up at Night
Career Center

7 Secrets to Become a Master of Meetings

But make no mistake – your meeting style matters to your career success and becoming a master of meetings will bolster your brand as a leader.

I revisit this topic a lot: In fact, when I talked with MSNBC’s The Cycle about Gen Y “becoming the boss” in the workplace, they asked about meeting style.

My belief is that the modern workplace needs a new approach to meetings. Here are seven common, “old school” meeting mistakes and the quick fixes that will turn you into a meeting master.

Meeting Mistake 1: Holding a touch base meeting every week.

Meeting Masters know that you should only hold a meeting when it’s necessary, not just because it’s Monday. Cancel extraneous meetings and see how much your team loves you – and how much more productive the meetings you do hold become.

Meeting Mistake 2: Inviting everyone who’s involved in the project.

Meeting Masters know that you should invite the minimum number of participants possible so you can really dig in and accomplish what you need to – and not waste anyone’s time. Sure, there are those who feel they should be in every meeting; in those cases, explain that you are keeping the meetings lean and promise to include them on post-meeting recaps of outcomes. I really liked the tips in this article from Harvard Business Review on how to find the ideal number of people to include in a meeting.

Meeting Masters know that every meeting does not have to last an hour. Based on the feedback I received on a recent post, it seems the San Francisco 49ers’ new strategy of having shorter meetings really resonated with my readers. Focusing on a few concrete must-dos will keep your meetings on point and only as long (or short) as they need to be.

Meeting Mistake 4: Waiting until everyone is there before starting the meeting.

Meeting Masters know that if you start on time, people will show up on time. If someone is late, catch them up after the meeting — don’t waste everyone else’s time with a recap. And, if you absolutely have to start the meeting late due to a key decision maker’s tardiness, be sure to thank your timely cadre and give them an approximate start time so they can use the time productively — checking email, returning a text or grabbing a coffee.

Meeting Masters know that they are in control of the meeting. When you see eyes and fingers wandering, you can either choose to take a quick break to let everyone check their phones (another tip from the 49ers’ new playbook) or set a rule that smartphones aren’t allowed during meetings. I’ve been to lunches where everyone stacks their smartphone in the center of the table and the first person to sneak a peek pays the tab. If you’re not the one running the meeting and can’t control other people’s phone usage, then do control your own. Meeting leaders notice who is paying attention and whose attention is wandering; always be the person who is fully present.

Meeting Mistake 6: Adding agenda items as they come up.

Meeting Masters know that a clear agenda sent before the meeting will ensure that everyone has the information they need and knows what their role will be. Include timing on your agenda so people know what proportion of the meeting will be devoted to which task, and then stick to it. If a topic is inciting more conversation than expected, table it to revisit in a follow-up email. 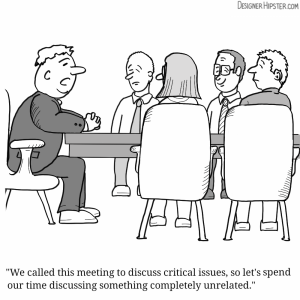 Meeting Masters know that every meeting should end not only with “next steps,” but a concrete plan for how those steps will be accomplished – and who is responsible. Make sure whomever is taking notes creates an action plan with owner and dates assigned.