Congratulations to the 2019 Art of the Show competition winners in the Signage/Décor category: T3 Expo, TCEA and Freeman! Read more each winner’s their signage and décor and the impact it made at their shows.

Although the event landscape has changed significantly since these pieces were created, some things prove to be timeless. Specifically, the roles that creativity, innovation and a strategic approach to marketing play in driving results. IAEE’s Art of the Show Competition recognizes outstanding marketing activities directly related to successfully organizing and executing an exhibition and/or event. As such, it is the only marketing competition tailored specifically to our industry. Each year, event organizers submit the work they did to promote their show experience across 14 categories and an independent panel of marketing and graphic design experts selects the winners.

In today’s IAEE Art of the Show Competition Winners Circle, we highlight the winners of last year’s Signage/Décor category, which evaluates printed and/or digital signage and décor used throughout the show. Judging criteria includes: overall presentation, visual appeal and creativity; usefulness of the signage and its content; how the signage/décor contributes to the overall “theme” of the event; and effectiveness of signage placement and décor throughout the show.

Under 75,000 nsf
T3 Expo in collaboration with Production Club and Opus
T3 Expo for Amazon re:MARS

MARS is a yearly event hosted by Amazon Founder and CEO Jeff Bezos. MARS brings together innovative minds in Machine learning, Automation, Robotics, and Space (MARS) to share new ideas across these rapidly advancing domains. This invite-only conference embraces an optimistic vision for scientific discovery to advance a golden age of innovation. MARS attendees participate in hands-on learning, demos of emerging technology and experiences where discovery leads to friendship. MARS guests include experts across machine learning, automation, robotics and space. Attendees from academia, start-ups and Fortune 100 companies gather to learn, share, and further imagine how these four fields of study will shape the future.

In 2019, Amazon launched the re:Mars conference as a public version of Bezos’s exclusive MARS conference. While MARS is intended to stimulate optimism and creative thinking, re:Mars has some more down-to-Earth goals such as teaching attendees how to apply AI and machine learning to their own businesses. The re:MARS conference is also designed to generate enthusiasm for AI, with sessions on topics like colonizing space and remarks from Bezos and AI leaders like Andrew Ng. Even Iron Man actor Robert Downey, Jr. was a keynote speaker.

Because this was the first re:MARS event opened to the public, the design team wanted the venue to represent the exclusive branding/colors that had already been created by Amazon and the private MARS events. The color scheme of teal, orange and chartreuse green was pulled throughout all parts of the venue in Las Vegas. The Aria was the perfect location to host the event, and to make these colors really stand out and pop against the windows and the desert backdrop. The lightness and the airiness of the venue worked well as a canvas to paint with this new updated brand.

The colors that were part of the event and the brand worked nicely with the Aria’s existing furniture. It was a neutral color palate and the light coming off the glass allowed all of the colors to reverberate across the space. T3 Expo decorated the glass awnings and the rooftops, and the way the colors and signage was dispersed across the different elements of the venue made it feel like one cohesive event.

The goal of the event was to represent the branding that had already been created for the private event and apply that to the public forum. The team created a powerful impact with the colors and the playfulness of the various geometric shapes and elements. T3 Expo used the space to the fullest, and applied all of these shapes and colors that were used to completely evolve the space and immerse it in this branding. It had a forward facing futuristic vibe to it, and felt fun and fresh without feeling stodgy. The conference really speaks to the future in a positive way, and the team wanted the branding, look and feel to represent that across the event. The ways in which the branding was applied was done in a clever thoughtful way and really reflected the brand. 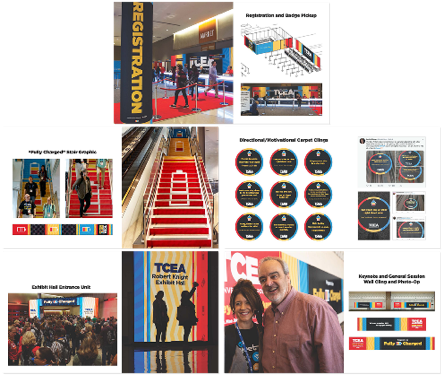 The Texas Computer Education Association (TCEA) is the largest state organization devoted to the use of technology in education. This nonprofit member organization has played a vital role in increasing the use and efficacy of technology in education. The TCEA Convention & Exposition attracts educators of all roles who are seeking better teaching and learning practices. The annual event offers for more than 1,000 engaging presentations, and over 450 exhibitors showcasing products and services to serve needs from classroom pedagogy to district infrastructure and support, as well as the opportunity to network and learn for thought leaders from around the globe.

The audience that comes to the TCEA Convention & Exposition consists of educators from all levels who are passionate and enthusiastic about their jobs. Because of that, the show needed to capture that spirit, and inspire and engage each attendee. In 2019, the TCEA Convention & Exposition theme was “Fully Charged.” Using this theme, and the existing branding, a campaign was created to include everything from advertising, promotion, social media, and the signage and decor, to provide a cohesive experience tailored directly to the audience’s expectations.

The main graphic element used in the decor’s design is the battery icon. The way the colors are arranged on the icon is representative of how “charged” the battery is. This arrangement of color is then replicated in all of the signage used throughout the convention center. Each color progresses to the next as a representation of each attendee’s growth as they move through the convention and experience new things. It is also used to build excitement through the signage that provides motion, and give the convention center areas of color and brightness. Based on the social media posts, and feedback received after the show, the concept was right on target.

The overall goal of the signage and decor was to educate, inform, and inspire the attendees. It educated them on the theme and direction that the convention was trying to convey. It informed them of where they were going, or where they were, in a bright, energetic and often humorous way. And it inspired them by reinforcing the idea that they were “On a mission, 24/7, for engaged learning” in order to be “Fully Charged.”

The signage/decor was successful in achieving the goals that were established and exceeded the expectations of how the attendees would interact with each set piece. For example, the floor directional signage was intended to direct and add some levity to the amount of space between rooms. It not only did that, but also became the number one convention branded item that was pushed out via social media. Attendees would take a picture of their favorite and then have other attendees respond to them saying, “Did you see this one?” This even caught the attention of the show’s featured presenters, who also would tweet out their favorites. Not only did these directionals help attendees get from place to place, but they also provided entertainment and camaraderie between sessions.

While the floor decals were a big hit, many other parts of the signage/decor morphed beyond their original uses, too. The wall clings outside of the general session were designed to give important keynote information. One afternoon, they became an impromptu photo-op for one of the more popular presenters. Each selfie taken in front of the signage then became a branded photo that was tweeted out to the world. The branded stairs became a meeting spot and a conversation piece, with many people posing on the stairs or climbing them to get a closer look.

All of these pieces created an engaging environment for the attendees, provided them with the information they needed, and functioned beyond that to help them enjoy their time at the convention even more.

Over 200,001 nsf
Freeman for AVIXA, The Audiovisual and Integrated Experience Association
InfoComm 2019

InfoComm is the largest, most exciting event in North America focused on the pro-AV industry, with 1,000 exhibitors, thousands of products, and 44,000 attendees from 110 countries. It is produced by AVIXA, The Audiovisual and Integrated Experience Association.

For InfoComm 2019, AVIXA teamed with Freeman on the strategic decision of how they would approach the branding of the show based on visual resolution quality challenges faced with onsite graphics in previous years. The 2019 show marked the first time the onsite experience acted as the primary driver of creative, instead of the usual process of taking web/print branding and then translating it onsite. The team determined that the main graphic element for 2019 would be a pattern of varied, integrated triangles in purple (main color palette) or blue (secondary color palette) created as vector files. These shapes could work on their own onsite in signage and graphics and also create an interesting overlay element on photography in our web and print collateral – tying the pre-show and onsite branding together.

The importance of using vector graphics rather than photographic elements (as done in past years) cannot be overstated: with onsite printed materials from small floral picks to outdoor banners, the show needed a flexible graphic element that could be scaled and reproduced in crystal clear resolution at any size, in any number of ways. The end result was that all signage and branded structures onsite had crisp graphics without any loss of resolution.

One critical success at the Orange County Convention Center (West Building), where 120-foot long walls had been constructed to cover the remodeling of the food service area, was the ability to print large format graphics at full resolution in order to turn a negative space into a bonus branding opportunity. The triangle theme continued throughout the show with individual triangle-shaped Nanoleaf® panels that lit up in the show colors on the entrance unit, LED triangles over the Center Stage area and stage backdrops for our education sessions.

Even as a high-tech audiovisual show, the team still wanted to have some “non-tech” experiential moments for attendees, whether it be looking down at the pond from the skywalk of the convention center, to taking a selfie with the show logo. Custom InfoComm triangle icon floats, nearly 16 feet in diameter, decorated the ponds in front of the Orange County Convention Center. To brand the pre-existing Orange County Convention Center lobby lounges in an inexpensive yet impactful way, wall graphics, custom pillows and recyclable corrugated cardboard stands were added to extend the InfoComm brand into every possible area without completely redoing and furnishing these spaces.

Benches doubling as “selfie opportunities” blended both the main and secondary colorways in a pseudo lenticular structure, so that when attendees walked from one side to the other, the color of the InfoComm triangle icon changed from the blue to the purple. The main entrance unit served as biggest “selfie opportunity” of them all.

The 2020 IAEE Art of the Show Competition is now open! Take advantage of discounted entry fees by submitting your entries before the early bird deadline on 31 August! You can also check out all the winners from the 2019 competition here.